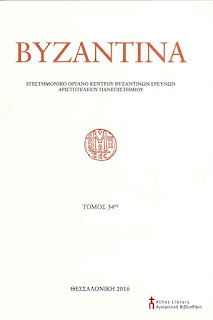 Χαριζάνης Γεώργιος,
«Αιτήσεις βοήθειας βυζαντινών μοναχών προς ξένους ηγεμόνες (14ος-15ος αιώνας)», Βυζαντινά 34 (2016), σ. 171-187.
Θεσσαλονίκη 2016
PDF
Λέξεις κλειδιά: Μονή Κουτλουμουσίου, Μονή Παντοκράτορος Κωνσταντινούπολης, Χαρίτων Κουτλουμουσιανός, Γρηγόριος Σιναΐτης, Μακάριος Μακρής, Ζητεία
Keywords: Koutloumousiou monastery, Pantokratoros monastery in Constantinople, Chariton of Koutloumousiou, Gregorios Sinaitis, Makarios Makris, Zeteia
Summary
Charizanis Georgios, Assistance requests from byzantine monks to foreign leaders (14th -15th century)
From the end of the 13th - beginning of the 14th c., the Byzantine Empire was in a situation of decline and weakness. Enlightened spiritual fathers, abbots and monks, due to the difficulties of the Empire, requested assistance, especially financial, for their monastic establishments, not only from the Byzantine emperor, who was unable to contribute, but also from foreign leaders.
In this study, we examine the following cases: 1st) of the saint Gregory Sinaites, founder of the monastic centre of Paroria in Thrace during the 1st half of the 14th c., 2nd) of Chariton, abbot of the monastery of Koutloumousi in Mount Athos during the 2nd half of the 14th c., and 3rd) of the educated monk Macarios Makres, abbot of the monastery of Pantocrator in Constantinople during the 1st half of the 15th century. All of them asked for assistance not only domestically and from the Byzantine emperor, but also from abroad and foreign leaders.
Our purpose is to show clearly the anxious attempt of the above fathers to assure economic aid for their monastic establishments by addressing these requests, both domestically and abroad.
From the examination of the aforementioned cases we can draw the fol lowing conclusions:
1. Both Gregory Sinaites (t 27 November 1346) and Chariton (tl381) requested assistance for their monastic establishments from different leaders. However, the main and important assistance, which is emphasized in the sources, came from the Bulgarian tsar Ivan Alexander (1331 -1371) and the voevode of Hungaro-Wallachia John Vladislav ( 1364-137 4) respectively.
2. It is notable to state that John Vladislav asked from Chariton, in exchange for his donations, special treatment for the Hungaro-Wallachian monks, who exercised solitary life in the monastery of Koutloumousi.
3. In the case of Macarios Makres (died 8 January 1431), during the 1st half of the 15th c., the economic margins were too narrow, so he requested assistancefor his monastery, specifically from the Serbian leader Stephan Lazarevic (1389-1427).
4. Finally, in all three cases (of Gregory Sinaites, of Chariton and Macarios Makres) we could say that we have forerunner forms of the phenomenon of zeteia, for which we observe great growth and expansion during the Ottoman occupation. In those centuries, due to the poverty and the economic needs, patriarchates, churches and monasteries sent delegations, missions and traveller-monks to Wallachia, Moldavia and Russia in order to collect the charities of the faithful people and the donations of the foreign leaders. In the cases examined here, we observe the following special characteristic: these zeteies are not addressed to the mass of faithful people, but to specific leaders, the assistance and donations of whom are requested.
Αναρτήθηκε από Antonios στις 23:12