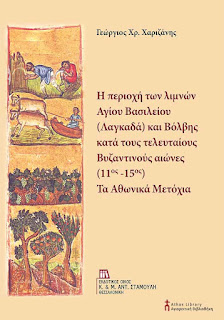 Χαριζάνης Γεώργιος,
Η περιοχή των λιμνών Αγίου Βασιλείου (Λαγκαδά) και Βόλβης κατά τους τελευταίους Βυζαντινούς αιώνες (11ος -15ος). Τα Αθωνικά Mετόχια.
Θεσσαλονίκη - Κομοτηνη 2017
PDF
Summary
Charizanis Georgios, The Region of the Saint Basileios (Langada) and Bolbi Lakes in Late Byzantine Times (11th-15th c.). The Athonite Metochia
The basin of the Saint Basileios (Langada) and Bolbi Lakes is flat, rich, fertile and productive. During the Byzantine era, it played an additional and secondary role in relation with the city of Thessaloniki. In fact, its role was substantial, because through the agricultural and other products that it produced, it contributed to the general economy of the Byzantine Empire, which principally was agricultural. The present study deals with the metochia, the possessions and other properties which Athonite monasteries acquired in the region during the later Byzantine times (11th-15th c.). Land owners and possessors (pronoiarioi) in the basin of the Lakes in Byzantine times numbered both secular, middle and large landowners, the State and the Church, together with monasteries and monasteries of Athos in particular. Drawing upon detailed research into documents from Athos, the study deals in chronological order with metochia and properties gradually acquired by some of the older and larger monasteries of Athos in the basin of the Lakes. Such monasteries are the Great Lavra, the Vatopedi, the Iviron, the Esphigmenou and other monasteries of the Holy Mountain such as the Chilandar, the Zographou, the Xenophon, the Xeropotamou and the Kutlumusiou. Where it is possible to locate these metochia, we can do so with great accuracy. This can be done through consideration of documents from Athos. The study also examines matters of economic interest regarding the cultivation of land, vineyards, herd, taxation and paroikoi connected with the monasteries of Athos and the Lake basin.
Αναρτήθηκε από Antonios στις 23:07