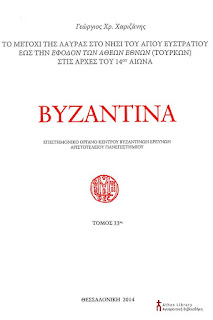 Χαριζάνης Γεώργιος,
«Το μετόχι της Λαύρας στο νησί του Αγίου Ευστρατίου έως την έφοδον των αθέων εθνών (Τούρκων) στις αρχές του 14ου αιώνα», Βυζαντινά 33 (2014), σ. 129-150.
Θεσσαλονίκη 2014
PDF
Summary
Charizanis Georgios, The possesions of Lavra on the island of Saint Eustratios unti the turkish attack at the beginning of the 14th century
At the beginning of the 14th century and particularly before December of 1305, the Turks carried out an attack against the island of St Eustratios (of Neoi), which was a possession of the Athonite monastery of Great Lavra. The abbot of the monastery, monk Gerasimos, required from the archbishop of Lemnos and Imbros to provide in his archbishopric a kathedra, i.e. an agricultural piece of land with residence for the monks of St Eustratios in order to settle there and save themselves from the Turkish danger. The archbishop granted the monks of St Eustratios and generally Lavra the little monastery of Theotokos Kakaviotissa, which is still existing on the southwest part of the island of Lemnos.
In this study is offered a short review of the history of St Eustratios (of Neoi) during the Byzantine period; the origin of the name of the island is specified and it is emphasized that the island is attested from the second half of the 9th century onwards. At that time the island of St Eustratios (of Neoi) was uninhabited and for a short period of time (865/866) served as a place of ascetic living for St Efthymios the Younger (t 15.10.898) and the hermits John Kolovos and Symeon.
About 976-984 the island of Neoi (St Eustratios) was donated by the emperor Basileios II (976-1025) to John Iberian (died 14.6.1005), a nobleman from Iberia (nowadays Georgia). The latter donated the island to Lavra because of his friendship with St Athanasios the Athonite (died 5.7.1001 or 1004), the founder of the monastery of Great Lavra. According to the Vita of St Athanasios, the island was donated directly from the emperor Basileios II to the monastery of Lavra.
Since then the island of Neoi (St Eustratios) was a place of solitary life for the younger monks of Lavra. In addition, Byzantine emperors such as Romanos IIIArgyros (1031), Nicephoros III Botaneiates (1079), Michael VIII Palaeologos (1259), Andronikos II Palaeologos (1298) and Andronikos III Palaeologos (1329) confirmed with chrysobulls the rights of possession of the Lavra monastery upon the island.
In conclusion, since the time that St Eustratios became a dependency of Lavra on the last quarter of the 10th century and until the beginning of the 14th century, the island was continually under the possession of Lavra and life went on peacefully and undisturbed.
At the beginning of the 14th century the Byzantine Empire being in a state of decline was unable to resist against Turkish danger. The Turkish tribes had conquered almost the whole Asia Minor - with exception of some cities and ports- and they had founded small and expanding states (emirates). The Emirate of Mentese and the one of Aydin were the first ones which started piracy into the Aegean sea. Perhaps the first or the latter attacked the island of St Eustratios. It is at that time that the monks of the island found shelter in the little monastery of Kakaviotissa on the island ofLemnos.
During the same period similar cases appeared: mottles from northwest Asia Minor abandoned their monasteries or monastic centers because of the Turldsh danger and sought shelter in the monasteries of Thrace in the European region.
The island of St Eustratios - because of the raid of the Turks - was abandoned and deserted during the 14th and 15th century. New inhabitants settled down again on the island in 1540.
Αναρτήθηκε από Antonios στις 23:16