Stanković Nebojša, Tradition, Innovation, and Individual Creation in Monastic Architecture: The Case of St Athanasius the Athonite and the Katholikon of His Great Lavra 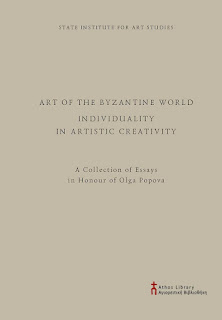 Stanković Nebojša,
«Tradition, Innovation, and Individual Creation in Monastic Architecture: The Case of St Athanasius the Athonite and the Katholikon of His Great Lavra», in: Art of the Byzantine World. Individuality in Artistic Creativity. A Collection of Essays in Honour of Olga Popova, p. 533-543.
Moscow 2021
PDF
Summary
This essay studies the role of St Athanasius the Athonite as a monastic founder in the conception and construction of the main church (katholikon) for his monastic community, the Great Lavra on Mount Athos. The examination of the katholikon’s architectural layout, elements and features, as well as its construction chronology, both set against the information offered by the monastery’s rules, written by Athanasius himself, his testament and two biographies, illuminates his involvement in the formation of the building. The application of the cross-in-square plan with a narrow narthex, which was seemingly the preferred choice for coenobitic communities, can be regarded as standard or traditionalist. Some other design solutions that Athanasius employed, such as the addition of the two lateral conches to the naos and the establishment of two subsidiary chapels attached to the narthex, were somewhat idiosyncratic at the time, but turned out to be influential, as they were soon after embraced by other Athonite monasteries. Therefore, his decisions can be also viewed as creative and innovative, likely taken in response to particular local needs or with some vision in mind. These considerations contribute to the much-needed understanding of the design process in Byzantium and the monastic founder’s place in it.
Αναρτήθηκε από Antonios στις 23:07