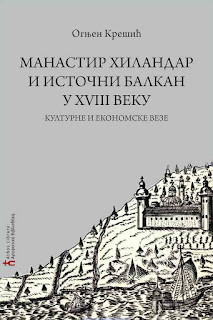 Крешић Огњен,
Манастир Хиландар и источни Балкан у XVIII веку: Културне и економске везе.
Београд 2021
PDF
Summery
During the 18th century, the ties between Hilandar monastery and the inhabitants of the Eastern Balkans became stronger and more complex. Starting from the middle of the century, the monastery acquired a series of estates in settlements across the territory that encompassed modern Eastern Serbia and Republic of Bulgaria. Moreover, not only that the monks visited towns and villages while travelling to collect alms, but also the monastery was visited every year by a great number of pilgrims. Thus, the two-way connections between the monks and the Orthodox population of the Eastern Balkans ensured that maintaining relations with Hilandar remained an important part of the religious practice throughout the researched period.
Αναρτήθηκε από Antonios στις 12:25