Bozinovic Vladimir, The sculptural decoration of the Chilandar's outer narthex 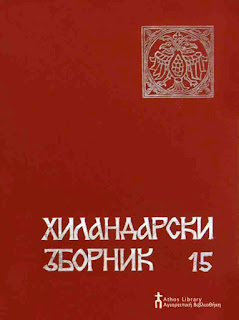 Bozinovic Vladimir,
«The sculptural decoration of the Chilandar's outer narthex», Recueil de Chilandar (Хиландарски Зборник) 15 (2021), p. 101-119.
Belgrade 2021
PDF
Summary
This paper focuses on the analysis of the sculptural decoration of the Chilandar exonarthex which was executed in two stages: at the time of the construction and when the passages of the structure were closed. In the light of more recent research, it is hypothesized that the outer narthex was most likely closed under Despot Stefan Lazarević. The execution of most of the elements within the passages is, therefore, attributed to a workshop of Moravian artisans active in the first decades of the 15th century. It is argued that the entire project was carried out with reused elements, which were remodelled and decorated with new reliefs. In several cases, the employed artisans copied or mimicked the previous sculpture of the Chilandar katholikon, which confirms that the carvings were made on the site.
Αναρτήθηκε από Antonios στις 00:15