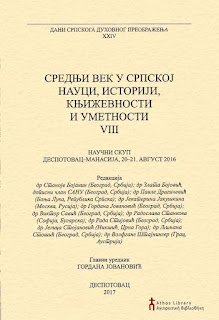 Живојиновћ Драгић,
«Средњовековне повеље за келију светог Саве у Кареји и пирг светог Василија у Хрусији: Прилог њиховом проучавању», в: Средњи век у српској науци, историји, књижевности и уметности VIII, с 91-102.
Деспотовац 2017
PDF
Summary
The article deals with the documents addressed to the hellion of St. Sabbas the Sanctified in Karyes andpyrgos of St. Basil in Chryse. Those two were important institutions of the Serbian Athonite monk community that were established at the end of the XII century {kellion in Karyes) and at the very beginning of the XIV century {pyrgos in Chryse). Both of them enjoyed the patronage of the Serbian Archbishops and rulers from the Nemanyid dinasty, among whom King Milutin and his grandson Stephen Dusan were distinguishing themselves. The favour of the most powerful Serbian monarchs procured also the support of the Byzantine Emperors. A total of 24 extant Slavonic and Greek charters (nine for Karyes, all of them in Slavonic; 15 for Chryse, five of them being in Greek and nine in Slavonic language) sprung between the end of 1220s and the dawn of the XV century, testify to that fact. The relations of the St. Sabbas kellion and pyrgos in Chryse with their mother monastery were marked by intertwining of the centripetal and centrifugal forces, and whether it was about the wishes of the centralising circles of Chilandari or the separatist endeavours of Chryse were at work, a trace remained in the diplomatic material. It is quite understandable that such conflicted interests were expressed in a significant number of forgeries and interpolations inserted into genuine documents that had made modem researchers' task of discrimen veri ac falsi all the more burdensome.
Αναρτήθηκε από Antonios στις 14:21