Kaplan Michel, The Monasteries of Athos and Chalkidiki (8th-11th Centuries): A Pioneering Front? 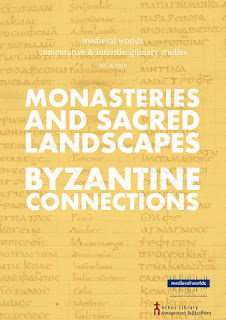 Kaplan Michel,
«The Monasteries of Athos and Chalkidiki (8th-11th Centuries): A Pioneering Front?», Medieval Worlds 9 (2019), Monasteries and Sacred Landscapes. Byzantine Connections, p. 63-81.
Vienna 2019
PDF
Keywords: Monasticism, Chalkidiki, Athos, village communities, Byzantine taxation, Proathos district
Λέξεις κλειδιά: Χαλκιδική, Άγιον Όρος, κοινότητες χωρικών, βυζαντινή φορολογία, Προάθως περιοχή
Summary
Following the re-establishment of the Cult of Images in 843, the Bithynian Olympus (present-day Uludağ, Turkey) became the site of so many monastic settlements that it was all but impossible for the ascetics there to find true solitude. Therefore, they set their sights on Mount Athos in Chalkidiki, and began to settle there from the ninth century onwards. It was a turbulent time for the region, and as a result of complex political developments the land was abandoned and reverted to the state (klasma lands), with the tax revenues benefitting central authorities rather than local communities. The economic growth of the ninth century thus explains the conflicts over the lands around Mount Athos between the peasant population, the monasteries founded in the Chalkidiki region, and the monks on Athos itself. These conflicts were exacerbated by the foundation of the large institutions of Xeropotamou, Lavra and Iviron – the latter two of which also enjoyed the status of »imperial monasteries«. The extant documentation allows us to better understand both the attempts by the monastery to appropriate the lands and the resistance to these attempts by the village communities, who were particularly concerned with retaining grazing lands for their animals. Interestingly, the officials and judges in charge of the region seemed to have favoured the village communities in these conflicts.
Αναρτήθηκε από Antonios στις 11:48