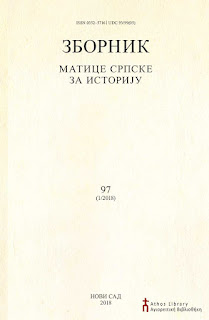 Пузовић Лиљана,
«Хиландарска писанија 1709. године», Зборник Матице српске за историју 97 (1/2018) 53-68.
Нови Сад 2018
PDF
Keywords: Serbian Patriarchy, Hilandar Monastery, Serbian monasteries, pious donations, Kosovo, Metohija, Raška, Toplica, Old Herzegovina, Old Montenegro, XVIII century
Summary
Katastichos No. 523 is a Serbian manuscript book where the Hilandar monk Dionisije recorded various data about the monastery’s benefactors and alms received during almsgiving starting from 1709. On his travels through the central parts of the Serbian Patriarchate, he visited many places in Kosovo, Metohija, Raška, Toplica, Old Herzegovina and Old Montenegro, from Prizren in the south to Studenica in the north. As a historical source, Katastichos No. 523 offers wide-ranging evidence on the settlements of this period and their population in the abovementioned parts of the Serbian ethnic space, as well as on their ties to the Hilandar Monastery. While collecting alms for his monastery, besides villages and towns, monk Dionisije of Hilandar visited several monasteries: the Patriarchate of Peć, Devič, Studenica, Nova Pavlica, Kovilje and Duboki Potok. He stayed in them for a while, received alms for his monastery and left us valuable information about their monastic communities. In addition, Katastichos No. 523 contains information about parish clergy and some bishops of the Serbian Patriarchate. The monks of Hilandar also received alms from village leaders (traditionally called kmet and knez), while the contributions of Serbian craftsmen of Novi Pazar and Prizren seem to have been particularly generous. Information recorded in the Katastichos bears evidence to the position of the Serbian people and the Orthodox Church in the period following the end of the War of the Holy League (1683–1699), a major armed conflict that brought great devastation on the population and church in these areas.
Αναρτήθηκε από Antonios στις 14:11