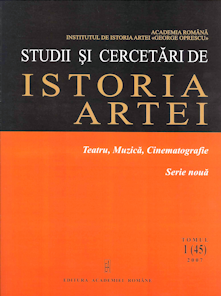 Țârlescu Ion Andrei,
«Relațiile țărilor Române cu Muntele Athos și manuscrisele românești din bibliotecile acestuia. Mănăstirea Sfântul Pavel. Date noi», Studiiși cercetări de Istoria Artei. Teatru, Muzicâ, Cinematografie, serie nouă, 13 (57), p. 45-62.
București 2019
PDF
Summary
Research carried out by Romanian and foreign experts at Mount Athos deals with almost 600  years  of  Romanian-Athonite  relations.  The  oldest  monastic  patronage  was undoubtedly  that  of  the  Georgians,  who  arrived  in  quite  a  large  number  in  the  holy peninsula  since 972. The  fall of Byzantium,  in  1453, ceased the aids of the Byzantine emperors,  which  continued  by  Romanian  rulers,  such  as  Stephen  the  Great,  Neagoe Basarab, or Michael the Brave. These gifts, made by the Romanian princes  to  support monasticism in the holy Greek peninsula, played nonetheless an important political role. The contribution of the “Romanian Byzantium” – as it was called by Nicolae Iorga – was not only of a donor, but also of a preserver of the Athonite cultural values. Following the journeys to Mount Athos of the Romanian scholars Teodor T. Burada, in 1882, Marcu Beza, in 1933, and of the Byzantinologist Gabriel Millet, in 1915, a remarkable Romanian cultural  and  spiritual  treasure  was  brought  to  light,  being  preserved  over  the  centuries. Precious manuscripts, from liturgical to science books, including an impressive collection of incunabula and ecclesiastical objects of great value, provide evidence of the Romanian-Athonite secular relations.  Our present research explores an important collection of manuscripts (most of which are music  manuscripts),  held  at  the  Holy  Monastery  of  Agiou  Pavlou (Athos).  The  rich repertoire of songs written by great Byzantine and post-Byzantine composers is spread through more than 75 such manuscripts, among which Doxastaria, Anthologia, Irmologia and Sticheraria.
Αναρτήθηκε από Antonios στις 16:00