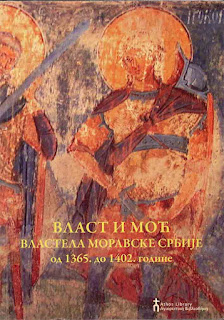 Јечменица Дејан,
«Поседи светогорског манастира Светог Пантелејмона у моравског Србији», в: Власт и Моћ властела моравске Србије од 1365. до 1402. године, с. 183-207.
Крушевац 2014
PDF
Keywords: possession, metochion, village, church, Monastery of St. Panteleimon, Mount Athos, Moravian Serbia, nobility, locating.
Dejan Ječmenica,
Possessions of the monastery of Saint Panteleimon in Moravian Serbia
Founding of the metochion of Athonite Monastery of Saint Panteleimon at the territory of Moravian Serbia was a process that lasted approximately two decades. This endeavor can basically be divided into two stages. The first begun at the time of Prince Lazar, just before 1380 and was continued in 1380/81. The second ensued the first one half a decade later, in specific circumstances, when a broader project, run by the ruling family Lazarević (nun Eugenia, Prince Stephen and Vuk), included a significant number of influential nobles. During nearly two decades, the Monastery of Saint Panteleimon acquired on the territory of Moravian Serbia at least 34 villages, 6 hamlets, 7 churches, one marketplace, one zabel (forest reserve or pasture with the exclusive right to use), half of the brod (the basic meaning is ford, but in this case the meaning is revenue from the tax for crossing a ford), yearly quantity of salt, houses in cities with people – possessions grouped in 16 or 17 metochions, mostly scattered on a wide area approximately from the Ljig river and Rudnik in the west to the valleys of Great and South Morava in the east, and down to Hvosno and vicinity of Novo Brdo (Novamonte) in the south. A significant part of the total possessions was the endowment of the Serbian nobility – more than one- third of the villages and more than a half of the churches, which is a vivid testimony of their material power. The charters about donations of Lazarević family to Saint Pantaleimon, of which stands out chrysobull of nun Eugenia and her sons, contain numerous names of the nobles from the territory of Moravian Serbia. There are eight nobles, among benefactors only. In three cases, names of their family members are mentioned as well (their wives), and in one case, even the sons of the noble pair. Therefore, the total number of the nobles who contributed to the donations of the Athonite monastery should be increased for five, up to the total of 13. Two noble families were kin of the ruling family. The list of the names of Serbian nobility does not stop there. Deducing from the names of donated villages, of which some contain names of the possessors, one can find out about six more nobles, of which for at least four of them can be said that they have acted in the time span covered by our research.
Αναρτήθηκε από Antonios στις 23:28