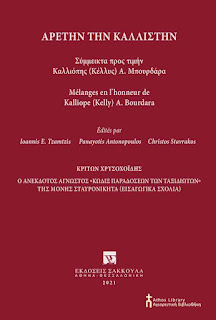 The unpublished, unknown "Codex of the Travelers' deliveries" of Stavronikita Monastery (Introductory Remarks)
Codex no.1 of the archive of Stavronikita monastery on Mount Athos has been until recently unknown and remains unpublished. Comprised of 86 pages, it includes financial reports known as paradóseis (deliveries) by the taxidiótes (travelers), i.e. the monks in charge of a zeteía (alms gathering) in various lands, and/or the oikonómos (head keeper) of one of the monastery’s metóchia (dependencies). The term taxídion defines both the act of traveling for alms gathering and the land within which the alms gathering takes place. These alms-gathering missions were undertaken by all the Eastern Orthodox institutions, particularly monasteries, and were characterized by a specific set of unwritten rules observed from the 16th (but mostly from the 18th) to the 19th century. The Stavronikita codex was opened in 1752, and its entries are in sequence up until 1820. However, there is a ten-year gap after 1821, when the revolution of Emmanuel Papas broke out in Macedonia, to which the monks of Mount Athos had pledged support. This part of the Greek Revolution was eventually suppressed by the Ottomans, resulting in a period of financial and social hardship for the monasteries of Athos until 1830. The entries in the codex reappear in 1831 and reach 1872, year of the last entry. They were written by numerous hands, and many were copied from other sources, usually ledgers. The entries are not set by date, but by the person conducting the taxídion. They include the dates of the journey, the name of the monk in charge, the place he traveled to, the amount of cash brought in, as well as the contributions in kind, which would include silverware, vestments, holy relics, icons, animals, and landed property, accompanied by an estimation of their value. The Travelers’ Codex does not mention the names of the donors and their contributions, which are cited in ledgers and commemorated in church for a period depending on the extent of their donation. Depending on the value of the deliverables, the monastery compensated the traveler with administrative positions and titles, which usually allowed his participation in the synaxis, i.e. the assembly of the elders. The codex also offers an image of the duration of each taxídion, which would not normally exceed four years, but in some cases lasted ten, or even seventeen years. The geographical distribution of the taxídia was identical to the monastery’s network of dependencies, which served as a base for alms gathering in their wider area. The areas extended eastwards to Eastern Thrace and Constantinople, westwards to Central Macedonia and Moglena (also named Óssiane), southwards to Larissa and Athens and northwards to Bucharest, where Stavronikita held the dependency of Arhimandritou monastery. Most, however, take place in the areas of Chalcidice, Serres and Drama. The codex of Stavronikita is, of course, not the only of the kind found in the archives of the monasteries of Mount Athos. Similar codices can also be found in Megiste Lavra, Vatopediou, Iviron, Dionysiou, Xeropotamou and Docheiariou monasteries. The practice of zeteía depicted in the Stavronikita codex is a product of the idiorrhythmic system of monastic organization that appeared after the 14th century, according to which each monastery is governed not by the abbot, who is now honorary for a brief period in compensation for a profitable taxídion, but by a group of elders that includes the sacristan, the dikaíos, and the ecclesiárches.
Αναρτήθηκε από Antonios στις 08:46