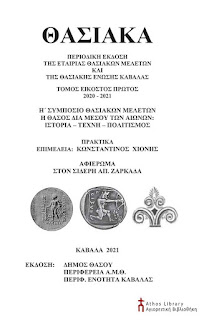 Μπονόβας Νικόλαος,
«Η Θάσος μέσα από έγγραφα μοναχών της μονής Βατοπαιδίου τον 19ο και τον 20ό αιώνα», Θασιακά 21 (2020-2021), σ. 238-254.
Καβάλα 2021
PDF
Summary
Nikolaos Bonovas, Thassos through 19th and 20th c. written testimonies of Vatopedi monks
Thassos is located in the salient for the Athonian peninsula maritime area delineated by the mountains Athos and Paggaio as well as the Macedonian and Thracian coastal line. Thus, the island became an important commercial center since the 7th c. BCE and during the Byzantine period (972 CE). Many monasteries
of Athos acquired land properties in Thassos and maintained rapport with the inhabitants of villages. The monastery of Vatopedi had built specialties, as evidenced by the correspondence of agiozonites fathers between 1808 and 1934. They travelled accompanying the Holy Girdle of Mary to various places, after invitations to perform liturgies, sanctifications and collection of donations. Moreover, Commisioner Arkadios in his book on the history of the Vatopedi Monastery documents the presence of monks and the properties of the Vatopedi Monastery in Thassos. Thus, the settlements through which monks of the Vatopedi Monastery passed are attested: Voulgaro (1808-1889), Panagia (1834-1889), Limenas (1835-1899), Kazaviti (1837-1933), Kalirrachi (1840-1933), Theologos (1890-1909), Hamidie (1909), Rachoni (1933-1934), Vouzi (1933-1934), Kavala (1899). The continuous presence and the formation of metochia of the Monastery of Vatopedi in Thassos for a century and a half is documented and the establishment of spiritual ties with village populations is recorded. The archival data offers an inside into the sequence of historical events during its pinnacle period in the 19th c., providing information on the local community from a social, economic and religious point of view.
Αναρτήθηκε από Antonios στις 14:14