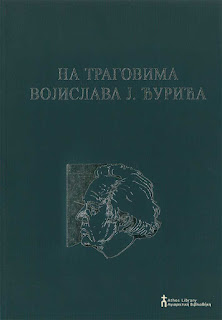 Чанак-Медић Милка,
«О плочнику католикона манастира Хиландара», На траговина Војслава Ђурића, с. 167-175.
Београд 2011
PDF
Summary
The floor of the catholicon at Chilandar monastery was made of multi-coloured stone tiles cut in various shapes- opus sectile- and containing incrustations in mosaics (fig. 1). The central part contains meanders (fig. 5) which, like the central part of the floor, are associated with Komnenian art, but they also have parallels with the floors of Lavra, Vatopedi and Iviron monasteries. The side conches contain, however, the motif of two crossed squares (fig. 6) the origins of which ought to be placed in the times of king Milutin. Based on these facts and some other material evidence, Paulos Mylonas suggested that the floor in the central part was the remnant of the old church dating from the 11th century, and that the conches and the floor in them were added at a later time, under king Milutin. Mylonas was influenced by his discoveries at Protaton and Lavra, where he found that at the former alterations had been made in order to provide separate space for choirs (fig. 2), while at the later side conches –also for choirs– and parecclesion were added (fig. 3). In order to check the hypothesis, M. Medić examined the binding material found in the floor of conches and in the space under the dome. It was confirmed that the same, specific type of lime binder was used in combination with powdered red marl soils which is strong adhesive. The same characteristics of the binding agents confirm that the floors in the sub-dome space and in the conches are of the same age. The conclusion has a wider implication because it appears that the floors of the catholicons at Lavra, Vatopedi and Iviron monasteries are of a later date that it was believed until now. They all originate from the end of the 13th century, except for Chilandar possibly from the very beginning of the 14th century.
Αναρτήθηκε από Antonios στις 23:27