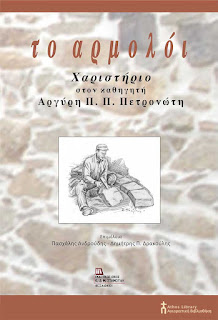 Πολυβίου Μιλτιάδης,
«Το τέμπλο του καθολικού της μονής Εσφιγμένου. Οι πληροφορίες των πηγών για την κατασκευή του», στο: Το Αρμολόι. Χαριστήριος τόμος στον καθηγητή Π.Π. Πετρονώτη, σ. 55-76.
Θεσσαλονίκη 2021
PDF
Summary
Miltiadis D. Polyviou
Τhe iconostasis of the Katholikon of Esphigmenou Monastery.
The information of the Sources ofits ConstructionStarted to be built in 1813, the iconostasis of the katholikon of the Athonite Monastery Esphigmenou is thework of craftsmen from the island of Chios, it having been during the late Ottoman period home to manywood and stone curvers. According to the original agreement of December 1812, this crew consisted of fourmembers. Their daily allowance, which would cover the trip to the monastery, was the same for everyone,while in addition they would be provided with the feeding. The final agreement, made with another local representativeof the monastery a few months later, is precisely described in a letter of the former addressed tothe monastery, in which he speaks of his own intense effort to keep the most coveted crew. For this reason, itseems that in the new agreement, the master builder's salary is increased, and one more craftsman is addedto the crew.
The cost for the construction of the templon (as well as that for the wall-decoration of the church) is to beentirely undertaken by Margaritis Kouramas from the village of Nigrita in the Serres’ region, according to therelevant document of February 1818, which was signed by the necessary witnesses. As the donor had no cashat that time, promises to cover the cost for both works either during his life time or in the case of death thecost will be paid by his heirs from the debit bonds of five named persons, reported in detail.
Αναρτήθηκε από Antonios στις 19:52