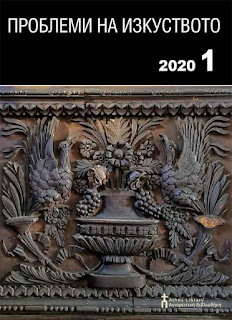 Куюмждиев Александър,
«Икони на Макарий от Галатиста в България», Проблеми на изкуството 53.1 (2020), с. 34-44.
София 2020
PDF
Summary
The article presents the production of icons known for the time being by Macarius from Galatista within what is now Bulgaria. It covers first of all the region of the Rila Monastery, from where three sets of his icons are known, and from Samokov, where his individual artworks have been found. Neither of his icons bears his signature except those commissioned by Archimandrite Ignatius for the iconostasis of the Church of the Assumption at the Pchelina (Apiary) Metochion, Rila Monastery, dated 1789 and 1792 respectively. Icons by Macarius at the Rila Monastery and in Samokov along with the presence of his nephews in these places throughout the 1790s testify to a very productive cooperation of many years between painters from Galatista and local donors. The early murals and icons by Zachary and Benjamin are concentrated in the same region, and there is a great deal of icons of the period when the style of Macarius has reached maturity. A critical evaluation is made of some wrong assumptions about the life and work of Macarius. The wrong notion in Creek literature that he had been trained with Damascene from Ioannina, who worked on Mt Athos in the early eighteenth century is corrected. Arguments are put forward, questioning whether or not Macarius should be believed to be an authentic Athonite painter, trained at the workshop led by Damascene from Karpenissi on Mt Athos or be said to be an ‘external’ painter, a member of a team formed back in Galatista, who later rented the cell of the Nativity of the Theotokos in Karyes to found a workshop on Mt Athos.
Αναρτήθηκε από Antonios στις 21:30