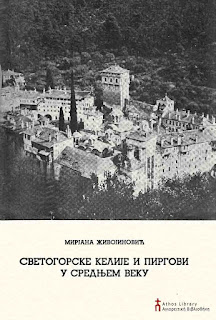 Живојиновић Мирјана,
Светогорске келије и пиргови у средњем веку.
Београд 1972
PDF
The Mount Athos kellia, as small integer monastic units, which had originated soon after the arrival of the first monks to the Mount Athos in the first half of the IX century, were maintained in the course of the whole history of the monkhood on it. However, while the histories of great Mount Athos monasteries were the main object of studies made by travellers and scientists, the kellia have been, up to the present day, far less exposed to the light of history. The historians of the Mount Athos deal with them only incidentally, only if they are directly connected with the principal object of their expositions.
Αναρτήθηκε από Antonios στις 20:30