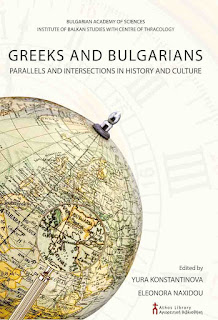 Tsigaras Georgios,
«Berg Athos und Thrakien. Wege der Kunst 1m 18. und 19. Jahrhundert», in: Greeks and Bulgarians: Parallels and intersections in History and Culture, S. 35-56.
Sofia 2021
PDF
Summary
During the Period of Ottoman rule, there was a distinct spiritual and cultural relationship between Thrace and Mount Athos, which acquired particular intensity in the 18th and 19th centuries. The historical and political circumstances of the time, in conjunction with the operation of the Succursales (Metochia) of the Mount Athos monasteries, created the economic and cultural context for both a heightened Athonite spirituality and art in Thrace, as well as the Orthodox Balkans in general. Numerus portable icons were executed by itinerant artists from the Byzantine workshops of Epirus which were active on Mount Athos; while there was also an impressive artistic presence of the local Athonite workshops, which included works by monk iconographers from Galatista and Karpenisi. The icons of these workshops met, to a large extent, the needs of the churches which were built in Thrace during the Tanzimat, a period of reform in the Ottoman Empire.
Αναρτήθηκε από Antonios στις 22:51