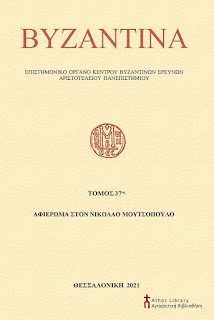 Σέμογλου Αθανάσιος,
«Ο Χριστός Αναπεσών στο Πρωτάτο και η δυναστική προπαγάνδα του Ανδρονίκου Β´ Παλαιολόγου», Βυζαντινά 37 (2019-2020), σ. 93-112.
Θεσσαλονίκη 2021
PDF
Summary
Semoglou Athanasios, The Christ Anapeson in the Protaton Church (Mount Athos) and the dynastic propaganda of Andronicos II Palaiologos
In this paper we examine the conditions and reasons for the emergence of a pictorial theme of particular interest, this of Christ Anapeson on the lintel of the western door at the church of Protaton on Mount Athos. This subject, which first appears in Byzantine art at the Athonite monument, is a veterotestamentary theophany that draws from the prophecy of Patriarch Jacob (Genesis 49: 9). The depiction of the Anapeson foreshadows the coming of the Lord, who as a young lion rises, conveying the message of the Resurrection and the promise of salvation. We think that in the Protaton church the depiction of the Anapeson was deliberately chosen and associated with an extraordinary event. It is the coincidence of the date of birth of the purple-born son and successor of Andronikos II Palaiologos, the baseless Michael IX to Easter Sunday. The above event takes a special place in the Encomium of the Patriarch of Constantinople Gregory II of Cyprus to Andronikos, in the first paragraph of the Synopsis Minor as well as in the panegyric Basilikos of Maximus Planoudis in honour of Michael IX Palaiologos. In all these texts, the connection of the birth of Michael with the resurrection of the Lord is strongly political and symbolical, as it is seen as a prophetic insight into the victory over the enemies and the salvation of the people. We believe that Anapeson is a propaganda image of Andronikos II, a part of his broader policy of continuing renovatio through the return to the righteous dogma and the ecclesiastical unity. The prospect of such a reading of the Anapeson with an ideological perspective and content is also confirmed by his appearance in another composition, just as early as that of the Protaton church, in the southern chapel in the Omorfi Ekklesia in Galatsi, Attica ((last twenty years of the 13th c). Anapeson shares the eastern arch of the Sanctuary with the composition of the “Therefore go and make disciples of all nations” (Matthew 28:19) in an unusual combination. The alignment of the two subjects is obviously deliberate, given the imperial and also propagandistic content of the iconography of the composition “Therefore go...” aimed at securing the northern borders of the empire from the Slavs and converting the new peoples. The connection between the two propagandistic themes in the Omorfi Ekklesia in Galatsi is therefore particularly perceptible as they are located in a monument of a Frankish area, the Duchy of Athens.
Consequently, the composition of the Anapeson in the Protaton church is a propaganda image of the emperor Andronikos II, which is a depiction of the resurrection and promise of redemption while at the same time embodying the hopes and vision for a restart and salvation of the Roman genre in the face of the multiple and serious threats from the external and internal enemies of the state. Finally, such an interpretation of the Anapeson also leads to an early dating of the mural decoration of the Protaton a few years after the year of the birth of Michael IX and at the beginning probably of the reign of Andronikos II (ca. 1282). In this case, the hypothesis of a leading and experienced painter, who would head a workshop of artists, including those certified by their signatures Eutychios and Michael Astrapas, could be justified.
Αναρτήθηκε από Antonios στις 23:44