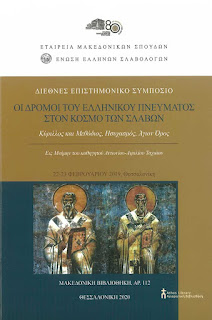 Ευαγγέλου Ηλίας,
«Από τον Ησυχασμό στη Φιλοκαλία. Η μυστική παράδοση του ανατολικού Χριστιανισμού από τον 14ο ώς τον 18ο αιώνα και το Άγιον Όρος», στο: Οι δρόμοι του ελληνικού πνεύματος στον κόσμο των Σλάβων. Κύριλλος και Μεθόδιος, Ησυχασμός, Άγιον Όρος. Διεθνές Συμποσιο εις μνήμην του καθηγητού Αντωνίου-Αιμιλίου Ταχιάου, σ. 59-69.
Θεσσαλονίκη 2020
PDF
Summary
Evangelou Ilias, From Hseychasm to Philokalia. The mystical tradition of Eastern Christianity from the 14th to the 18th century and Mount Athos.
The mystical tradition of Eastern Christianity interweaves with the life of the Church, and in particular with the emergence and evolution of monasticism. This mystical tradition appeared as an established spiritual experience under the term Hesychasm at the end of the 13th and especially in the 14th century. Mount Athos played a key role in the process of codifying and capturing this hesychastic experience. Thus, Hesychasm went beyond the limits of monasticism and established itself in the ecclesiastical and social life of both the Eastern Roman Empire and the slavic states of South eastern Europe, which followed the Tradition of Constantinople. Hesychasm dominated in the entire orthodox world and helped overcome the schisms that tormented it and kept it divided while reinforcing its religious and spiritual experience. The disastrous ottoman conquest led to the subjugation of the Christian states of the Balkan Peninsula and to the removal of Hesychasm from the social and ecclesiastical scene. The mystical experience was certainly not forgotten and did not disappear. It ceased, however, to lead the ecclesiastical and social life, and it returned to the monastic cell, where it continued its cultivation. This is evident by the fact that even in the darkest centuries of this period, there are preserved some manuscripts, although few, in which the mystical tradition and experience is recorded and imprinted, and some of them come from Mount Athos. Mount Athos, however, played an important role in the 18th century revival of the mystical tradition, when works of this tradition were published in an anthology known as Philocalia (Dobrotoljubiein Church Slavonic). At this time the interest for the mystical tradition and experience was once again stirred. Therefore, the mystical tradition transcended the boundaries of monasticism once again, seeking to respond to the wider searches of the ecclesiastical community of that time.
Αναρτήθηκε από Antonios στις 12:59