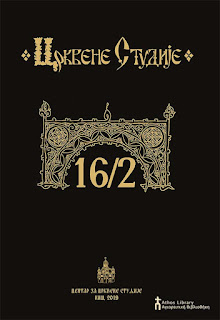 Радић Радивој,
«Света Гора и Хиландар у старим српским записима из Војводине», Црквене Студије 16.2 (2019), с. 251-256.
Ниш 2019
PDF
Summary
The old Serbian inscriptions from Vojvodina, the six-volume edition consisting of over ten thousand such texts, collected in the period from the 16th to the 20th century, Mount Athos is mentioned three times, and Monastery Hilandar is also mentioned on three occasions. In fact, they are combined mentioned in four different inscriptions. One only mentions Mount Athos, two inscriptions mention both Mount Athos and Hilandar, while the fourth only mentions Hilandar. All four inscriptions date from the 18th century. Besides the general remark on the founding of the Monastery Hilandar and its founders, Stefan Nemanja and St. Sava, the other inscriptions mostly describe various visits by spiritual leaders and book donations. The old Serbian inscriptions are suitable for various forms of quantifications that could bring about very interesting conclusions. Thus, for example, cities most frequently mentioned in the old Serbian inscriptions from Vojvodina are Moscow, then Vienna, Buda and Kyiv, while Constantinople is almost not mentioned at all. On the other hand, Constantinople is the most mentioned city in the old Serbian inscriptions created in the regions south from the Sava and the Danube rivers during the same period (16th to 19th centuries), only then followed by Moscow and Vienna.
Αναρτήθηκε από Antonios στις 14:36