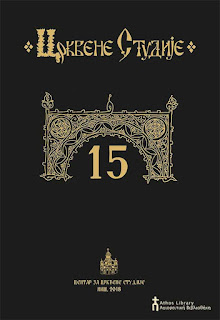 Копривица Марија,
«Обавезе српске цркве према карејској ћелији у средње веку», Црквене студије 15 (2018), с. 509-518.
Ниш 2018
PDF
Summary
The Cell of St Sava in Karyes (Typikario) was spiritually and administratively connected to Hilandar monastery, but it had a total economic autonomy. There are a few documents testifying that the pontiffs of Serbian church in Middle Ages were obliged to pay a certain amount of money to St. Sava cell, annually. The oldest preserved document mentioning this tax is the charter of the archbishop Nikodim for the Cell of Karyes from 1321. According to this chart, the Archiepiscopacy was paying the amount of 40 perpers for the sustenance of monks in Karyes and, apart from that, was supposed to give one mule. From the same document we find out that the above-mentioned charge had also been present in the earlier period.
The charter of emperor Dusan from 1355, among other things, contains also a decree about the obligations of the Patriarchy towards Karyes’ cell in the same amount. Apart from that, it clarifies the problem by explaining that the Patriarchy is collecting the profits from the “vrhovina” and “krina” (a type of church tax) from Hilandar metohija, and because of that, as compensation, it allows the Karyes cell a monetary charge. The document analysis shows that establishing this kind of relations could have happened only in the period after moving the seat of the Serbian church to Pec, most probably in the period of the archbishop Sava III.
It was implied that the pontiff of Serbian church had a separate eparchy in the vicinity of Pec, to which two Hilandar estates belonged, probably metohija of Krusevo. Scarce data on this eparchy do not allow reconstruction of its size. Mentioning the bishop of Pec in the 15th century may be related to this special church area activity.
Αναρτήθηκε από Antonios στις 14:55