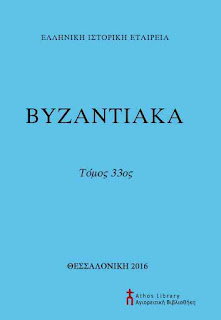 The monasteries of Mount Athos (Holy Mountain) possessed landed property (metochia) on the Athonite peninsula, in Chalkidiki, in the city of Thessaloniki and its surroundings, in the valley of the Strymon River, generally in Macedonia, but also

on the islands, for example on Lemnos, Thassos and Saint Efstratios, in Thrace and other regions of the Byzantine empire.

It appears from the archives of Athos that the monasteries of Vatopedion, Great Lavra, and Pantocrator owned landed property (metochia) in Thrace.

The first Athonite monastery that acquired landed property in the area of Thrace was the monastery of Theotocos Vatopedion. Vatopedion owned the following estates (metochia) in Thrace:

2) a metochion inside the castle of Peritheorion (before 1080).

3) the monastery of Saint Georgios in Kalamitzion (Kalamitziotou), with a land of 1500 modioi, north/northwest of Peritheorion, nowadays in the villages of Sounion and Monachoi, between Komotini and Xanthi (May 1305).

In Xantheia (modern Xanthi) and its region

4) the land of Sellarion, nowadays near the village of Seleron, about 9 km east of Xanthi (May 1305).

5) the planene (mountainous pasture) τοῦ Βοὸς τὸ Πηγάδιν (the Ox-well) on the mountains of Xantheia, north of modern Xanthi (May

6) the metochion of Saint Panteleimon in Xantheia (1329). Inside and around Constantinople various properties, included

7) the monastery of Theotocos Psychosostria in Constantinople with all its dependences inside and outside the City, with total land

9) the vivarion (fish-farm) of Saint Theodoros in the aforementioned lake (1371).

The monastery of Great Lavra acquired its first estates in Thrace during the 2nd decade of the 12th c. It possessed there the following

2) houses and other lodgings for rent inside the castle of Traianoupolis and also vineyards and fields in the surrounding area (1115).

In Constantinople and its region

4) the choria (villages) Agourina and Kentenariou in the region of Parapolia, west of Constantinople, between Athyra and Region, with fields of 800 modioi and other land (1334). 5) the xenon of Saint Panteleimon and houses, workshops and money- exchanging tables inside the City at the gates of Prodromos and Holy Resurrection (annual revenues from rents at 900 hyperpyra) (1342).

6) the metochion and kathisma of Saint Demetrios at the Plateia gate of Constantinople (1367).

In Ainos (modern Enez) and its region

The monastery of Christ Pantocrator owned the vivarion (fish-farm) of Papagiania by the Nestos River in Thrace (1394).

In conclusion, the monasteries of Athos (Vatopedion, Lavra, Pantocrator) possessed estates (metochia) in Thrace and other regions of the Byzantine empire, by which the necessary revenues for their preservation and survival were assured.

The metochia they possessed in Constantinople, provided them access to the decision-making centres of the political and ecclesiastical authorities.

Finally, apart from the strong economic role the metochia of the Athonite monasteries retained, they were also centres of spiritual influence of the Holy Mount monasticism to the local societies, with which they maintained a close relation and contact.