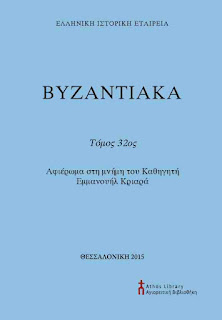 In the Life of Saint Athanasios Athonite the attempt of a number of Athonite abbots to meet the emperor Vasileios II (976-1025) is sufficiently described. The abbots’ purpose was to slander Saint Athanasios, whom they considered responsible for

their subordinate position in relation to the “old fathers”, to the emperor. John Phakenos, the protos of the Holy Mount, was deceitfully convinced to be the leader of the mission to the emperor Vasileios II, who was at that time in Macedonia with his troops, preparing the war against the barbarians (i.e. the Bulgarians). To the abbots’ and John Phakenos great surprise, on their way to the emperor, they met Saint Athanasios with other monks, who were on their way back from the emperor, whom they had already met. Being extremely embarrassed, the abbots tried to apologise. Only the protos revealed the plot to Saint Athanasios and asked for forgiveness. The abbots continued their way to the emperor but, to their bad luck, they were captured by the “Turks”, who at the time, were not enemies but allies of the emperor. The “Turks” undressed the abbots and left them naked in the street. Saint Athanasios was such a philanthropist that he gave clothes to the abbots, who were brought in front of him, forgave them and they all returned happy to their cells. The facts mentioned above raise some questions, which this paper aims to answer: 1) When is exactly the attempt of the Athonite abbots to meet the emperor Vasileios II dated? 2) Where was the emperor at the time and what were his plans? 3) Who were the so called “Turks” mentioned in the Life of Saint Athanasios Athonite? Concerning the first question, a date between March or November 991 and September 994 is supported, because John Phakenos holds the office and signs as protos from November 991. Although the Athonite abbots failed to meet the emperor, it is certain that Vasileios II met Saint Athanasios Athonite during this period. Concerning the second question, evidence derived from the Life of Saint Athanasios Athonite, John Skylitzes and the Encomium of holy Photius the Thessalian prove that the meeting took place in Thessaloniki or perhaps somewhere in the plain located to the west of the city, where the emperor had camped with his army. The presence of Saint Athanasios and holy Photius was due to the emperor’s need to seek moral support and the comfort of the prayers of holy men, just before continuing the war against the Bulgarians. Photius was a monk practicing solitary life at the foot of the mountain Chortiatis and Vasileios II called for him. In addition, the emperor sought allies in order to surround the Bulgarians both from North and West. In the period 991-994 he came to negotiations with the Croats and the Serbs. The latter sent delegates, who tried to come to the camp of Vasileios II from the sea.

Finally, as regards the real identity of the so called “Turks”, who are mentioned in the Life of Saint Athanasios to have captured the Athonite abbots, they were probably Hungarians, who are reported to have settled in the valley of Axios river (Vardar) in the middle of the 10th century. After the final victory of Vasileios II over the Bulgarians, the Hungarians settled were under the archbishopric of Bulgaria (Achrida) (in 1020), while those living in the valley of Axios river (Vardar) consisted the bishopric of “Vardariotes or Turks”, that belonged to the metropolis of Thessaloniki.