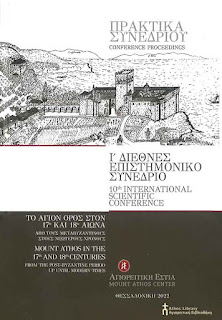 Χρυσοχοΐδης Κρίτων,
«Βήματα προς τη νέα εποχή. Το Άγιον Όρος κατά τον 17ο και 18ο αιώνα», Το Άγιον Όρος στον 17ο και 18ο αιώνα. Από τους μεταβυζαντινούς στους νεώτερους χρόνους. Αγιορειτική Εστία. Πρακτικά Ι´ Διεθνούς Επιστημονικού Συνεδρίου, σ. 27-42.
Θεσσαλονίκη 2022
PDF
Chryssochoidis Kriton,
Steps towards the new era. Mount Athos in the 17th and 18th centuries
Summary
It is well known that the 16th century, at least until its last decades, was a period of recovery and flourishing of Athonite monasticism, after the upheaval caused by the Ottoman conquest, as sufficiently illuminated during a previous conference of the Agioreitiki Estia. It was also a period of intense continuation of the Byzantine tradition at the institutional, organizational, spiritual, and other levels, in such a way that we can speak of a "post -Byzantine Athos".
The 17th century, for which only some general and mostly uncertain observations can be made, was a period of prevalent fluidity and stagnation. By contrast, the 18th century is characterized by a universal and multi-faceted recovery parallel to the recovery of the Greek, as well as the Balkan world. Both centuries constitute a single period, albeit with distinct characteristics, during which the physiognomy of modern Mount Athos was gradually shaped.
The present communication will examine certain aspects of the changes, adaptations and new challenges that led Athos from the "post -Byzantine" phase to the realities of modern times.
In the administration and organization of the community, the old centralized system was replaced by a representativeness, which gradually became more functional; the institutional participation of lay peop~e in the affairs of Mount Athos was adopted, which, together with several more changes, are reflected in the new constitutional documents (typika).
The centrifugal tendencies, which had already appeared earlier, were consolidated with the institutional organization of idiorrhythmic monasticism as the predominant form of organization of internal life of the monasteries, whereas other forms of monastic life, such as residing in sketai or in cells, witnessed a remarkable florescence. Various factors imparted a predominantly "modern Greek'' physiognomy to Athos, with extroversion (in the positive sense) as the main characteristic. At the same time, Athonite monasticism was confronted with modernity, thus contributing to the creation of the religious version of this modernity.
Αναρτήθηκε από Antonios στις 21:52