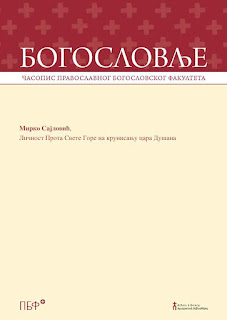 Сајловић Мирко,
«Личност Прота Свете Горе на крунисању цара Душана», Богословље 75.1 (2016), с. 86-99.
Београд 2016
PDF
Summary
Summary: Data about the protos who attended Dušan imperial coronation in Skopje in 1346, can not be found in the primary historical sources. More light could be thrown on this unresolved question only on the basis of analysis of relevant documents from Mount Athos (Docheiariou, № 24; Chilandar I, № 133). Based on the results of these analysis it is possible to discard some assumptions that were accepted until now. Reliable historical data and the results of the critical analysis of documents point to the conclusion that the successor to the protos Isaac was Nifon. Time of his administration as the protos (January 1343 – December 1347) corresponds to the time of Dušan’s negotiations with the Athonite monks on acceptance of his rule (December 1345) as well as the time of his imperial coronation in Skopje (April 16, 1346). Therefore, with a high level of certainty we can say that the potos Nifont was on Dušan imperial coronation.
Αναρτήθηκε από Antonios στις 19:35