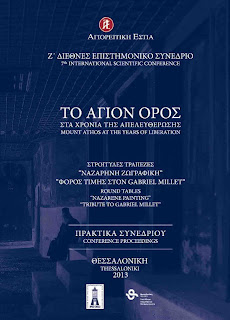 Πατάπιος Καυσοκαλυβίτης μον.,
«Όψεις της απήχησης της Απελευθέρωσης του Αγίου Όρους στη ζωή των Αγιορειτών μοναχών», στο: Το Άγιον Όρος στα χρόνια της Απελευθέρωσης, σ. 147-159.
Θεσσαλονίκη 2012
PDF
Summary
Monk Patapios of Kafsokalyvia
Aspects of the impact of Mount Athos Liberation on the life of Athonite monks
November 2, 1912 has remained and will always be indelibly written in the memories of the Athonite Fathers as the day of liberation for their place after the centuries-old Turkish occupation. Official documents, letters and other scripts of the time (mostly unpublished), as well as the Athonite oral tradition and unknown photographical material reveal typical aspects of the impact that the joyful event of Mount Athos liberation had on the life of Athonite monks. Reference is made to the praying preparation of the monastic community upon Greece's entrance into Balkan War I, to the awaiting for the liberation of the Holy Mountain as soon as the joyful news of the liberation of Thessaloniki had been heard and to the expectations among the Athonite monks who had envisaged the successor to the throne Konstantinos as the living descendant of the Byzantine Emperors, those who had been the blessed institutors and founders of the Athonite monasteries. Reference is also made to the fact that the Athonite monks perceived the liberation of Mount Athos as a prolongation in time of both the Greek War oflndependence in 1821 and of the withdrawal of the Turkish occupation army from Mount Athos in 1830, since "all unliberated Greeks" had turned their hopeful eyes to the newlyestablished Kingdom of Greece and had trusted their liberation in it. The work also describes the fervent welcoming of the liberating army force by the Athonite monks and the ways in which they expressed their overwhelming delight. Finally, the fund-raising initiative in Mount Athos is presented, which was organised in order to financially support the ongoing war operations of the Greek Army.
Αναρτήθηκε από Antonios στις 14:27